For over 15 years Team Rammstein.nl have been going to Rammstein shows. But one way or another, we never really went together, Until Friday 8th July 2016 in Waldbühne Berlin. Specially for the occasion, but hopefully for more events to follow, we had custom Rammstein.nl t-shirts made as well as a custom flag. We arrived in Berlin on Thursday and our first stop was the Prater Biergarten. That evening was filled with meeting old and new friends from all over the world and beer. A lot of beer! Oh, and there was football too. An evening full of laughter, fun and LIFAD, one of the best evenings of the year. That’s the beauty of LIFAD, meeting your friends is almost just as important as seeing the band. 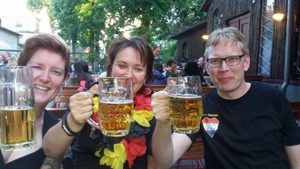 Friday we woke up with a somewhat heavy head (at least I did) so it was a slow start of the day. We didn’t have any queuing plans so we took our time to get to Waldbühne. Since some of us spent the morning shopping and some other sightseeing, we met in front of the Rammstein merchandise truck (in case you haven’t noticed, the truck has a Dutch license plate). The photo on the side of the truck provided a perfect backdrop for our official team photo take by long-time forum member Yuta. We joined the queue, immediately meeting friends again so the waiting time passed quite quickly talking to each other. At five o’clock the doors opened, we went in and got our first look at the venue. WOW!!! What an amazing place! We made our way down the stairs and found a nice spot on the lowest level. Time to start collecting the special Rammstein drinking cups. We bought our first beer from a guy with a portable tap but that was a mistake, he didn’t have the Rammstein cups. Too bad, now we had to have one more extra drink to get the collection complete. It’s a tough job, but we did it! It started raining and Waldbühne turned into Wuhlheide 2013, the famous Rainstein show with all the colourful ponchos. 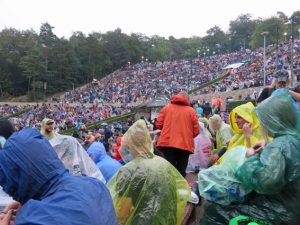 At 19.30 hrs Peaches came onstage and after ten minutes I decided it was time to go….. to the toilets. When I got back, Peaches still wasn’t finished so Irmsel got us some more beers to make things a little easier. On the bright side: halfway her “show” it stopped raining. Finally the countdown for the Rammstein show started. From the start the whole crowd from first row to last row was jumping and singing. An atmosphere you will only find during a Rammsteinshow in Berlin even when there were no surprises in the setlist. I am not going to describe the whole show song by song as most of you will know it by now. For one and a half hour we danced, we sung, we cheered and caught a four-story-long confetti during Amerika. When the show was finished we sat down to let it all sink in and to catch our breath again. After half an hour or so we were urged to leave so we climbed the stairs to the exit. But we could not leave, we stood at the top looking down at the now deserted Waldbühne. Der Meister happy he had seen the show, Irmsel and I happy we could go again on Saturday, all of us happy we finally got the chance to see the show together! We didn’t get the chance to complete our cup collection as we were kindly asked to leave the venue. So it was back to the apartment to dream it all over again. 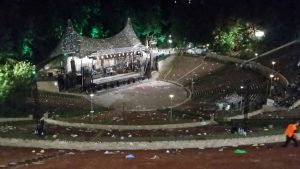 Saturday epilogue:
As said, Irmsel and I also had tickets for the Saturday show. Irmsel went again for a place in the lower level stands. I was in need of some extra vitamin P. So I headed to the right side of the stage. Front rail was of course full, but a bit more to the side there was still room. A bit later I was joined by Rammstein UK and we were allowed to hang our flags on the rail From our spot we had a great view on both stage and crowd and we kind of saw how the band sees the crowd from the stage. The show again was amazing. This time we didn’t go back to our apartment when Engel ended, we went to the Preussische Landwirtshaus for a little get together with a lot of Rammstein friends. So we perfectly ended this perfect weekend as we started it: in a Biergarten with friends!

Now we wait for Rammstein to end their tour, get back in the studio, release an album and get back on tour again!
See you all there!!!
Iver68

📂This entry was posted in Geen categorie

« Who wants to be the owner of Till’s “Dr. Dick” prototype? Documentary “Rammstein Paris” to be released in theaters »