Arrays of lighting pods, collapsing tower blocks and a vast quantity of pyrotechnics which even includes a shower of exploding dolls.

Brilliant Stages were approached by Jon Perry of Perry Scenic to collaborate on the supply of the staging for German Industrial Metal Rock Band, Rammstein who tour Europe and the Eastern block from November 2009 and well into 2010. 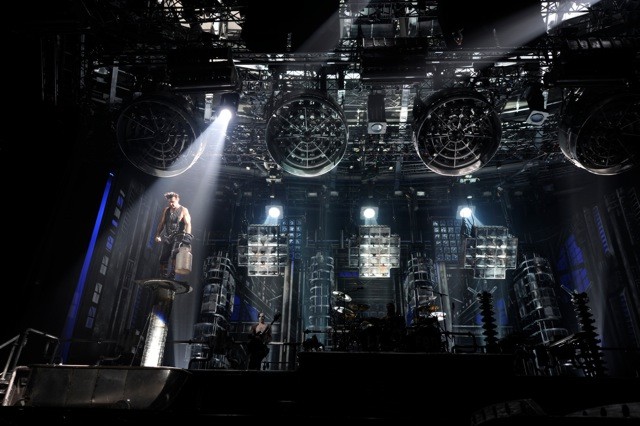 The brief from designers, Roy Bennett and Peter Aquinde, was for a heavy metal ‘iron foundry’ look which would incorporate the main stage into the array of lighting pods, collapsing tower blocks and the vast quantity of pyrotechnics which even includes a shower of exploding dolls.

The staging mainly consists of tiered band platforms surmounting the main stage, with 4 collapsible towers forming the industrial backdrop of the set.

Initially, Brilliant Stages designed and built a hydraulic ramp which was set into the centre of the Stageco (Germany) mainstage, downstage of the drum riser. This manually controlled ramp allows lead singer, ex-Olympic swimmer Till Lindemann, to access the stage from beneath the riser through the Brilliant Stages-built sliding louver doors and also to access the main stage from the top of the drum riser.

Band platforms were then constructed to sit on top of the main stage using Brilliant Stages’ custom staging system of aluminium NEACO ‘NI’ bars for the decks which allow the full pyrotechnic and lighting effects to penetrate through the grill. 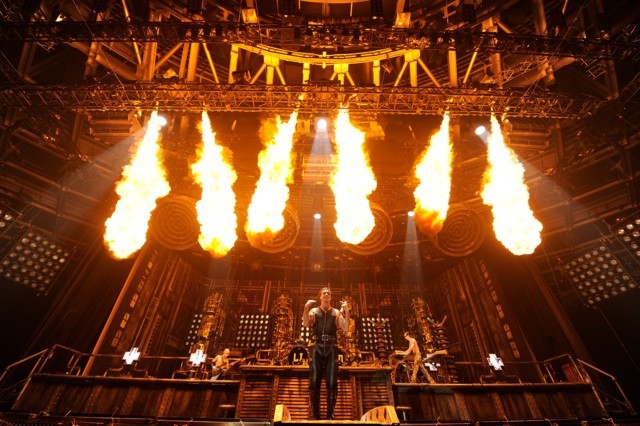 Upstage, the band risers are surmounted by an industrial pipework handrail, inset with the Rammstein logo constructed from LED light boxes.

Within the stage left band platform, which carries keyboard player ‘Flake’ Lorenz, is set a running machine which Flake uses throughout the show, covering several kilometers! The travelator is set on a revolve which can spin 180 degrees enabling Flake to play both of his keyboards which are supported on custom built keyboard stands on either side of him. These stands can also be spun around their support columns, which are designed to look like giant electric insulating pylons, at will.

Upstage of the performer platforms, Brilliant Stages supplied four collapsible towers which are used as integral features of the lighting effects, complete with chasing fluorescent tubes and Upstaging Inc. Headlite W LED fixtures. The towers have a series of scenic panels, wrapped around the central truss tower, which can be raised or lowered by means of a wire winch system controlled remotely by a Kinesys motor drive system.

When the panels are in their raised position they resemble a 1930’s Eastern European apartment block and can collapse with the ever-present crescendo of pyrotechnics supplied by ffp Spezialeffekte & Veranstaltungslogistik GmbH.

9m high when deployed, when ‘collapsed’ the towers fold down into purpose-built bases little more than 2.25m high which are set on castors to enable rapid built, strike and transportation. 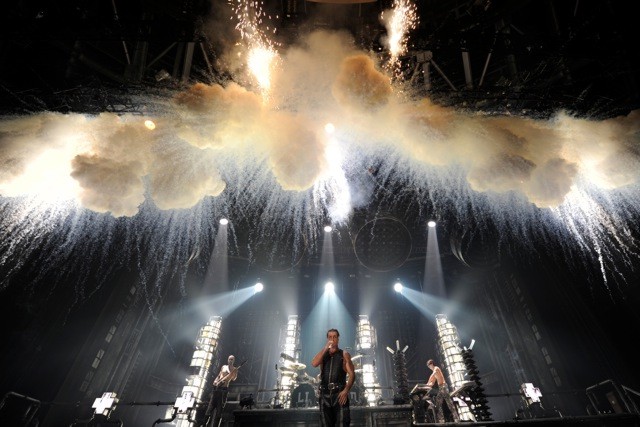 For the top of the show both Brilliant Stages and Perry Scenic supplied the band reveal which involves the 2 guitarists smashing their way through a disposable composite panel, with a powerful Falcon Cannon punching beams of white through the ever-enlarging hole. “The central panel was originally conceived as a sheet of steel that Till Lindemann would burn through with a plasma torch,” explains Brilliant Stages’ Tony Bowern, “but the initial concept was refined to the final existing effect which is that of a burning ring of pyro around an oval panel which is kicked out by Till to reveal him in blood stained attire!”

“Brilliant Stages produced some excellent engineering during the construction and have provided great tour support,” says Nicolai Sabottka. “Tony and his team were always there when we needed them.”

Brilliant Stages would like to thank Rammstein, Till Lindemann, Flake Lorenz, Christoph Schneider, Paul Landers, Oliver Riedel and Richard Kruspe (in no particular order) and all of their crew for letting them be a part of this full-on show!

Rammstein continue to take their brand of Dance Metal – in a 1km truck convoy – across Europe and the Eastern block until July 2010.